Belize Blue Hole is located at Lighthouse Reef Atoll. Of Belize’s three atolls, Lighthouse Reef is the furthest offshore and home to one of the most popular dive sites in the Caribbean, the Great Blue Hole. The Jacques Cousteau’s Calypso Expeditions in the mid 1970’s made it famous.

There are six cayes in the atoll.  One of the two Sandbore Cayes in the north have a lighthouse occupied by a keeper and his family. Mangrove covers most of the island and there is an internal lagoon noted for saltwater crocodiles and snowy egrets. 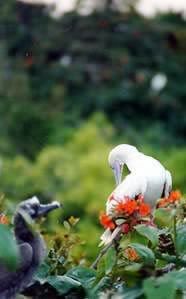 The most popular caye at Lighthouse Reef Atoll is Half-moon Caye located at the southeast corner. The first marine reserve in Belize was established in this area in 1982. It encompasses 10,000 acres of the atoll and 15 square miles of surrounding waters. The area is divided into two very distinct ecosystems. In the western half it is densely vegetated. The soils are made rich and fertile by guano from thousands of sea birds nesting in the area. The eastern half by comparison is vegetated primarily by coconut palms and very little underbrush.

One of the principle inhabitants of the western side is the Red-footed Booby, numbering around 4000 breeding birds. The adult booby population found on the island is unusual in having an almost total predominance of the white color phase. The only other similar booby colony is on an island near Tobago. If you’re an experienced nature-watcher you’ll see many different kinds of birds and iguanas and minor wildlife. The caye is also a habitat for ninety eight species of other birds, these include warblers, ospreys, white-crowned pigeons and the magnificent frigate bird. 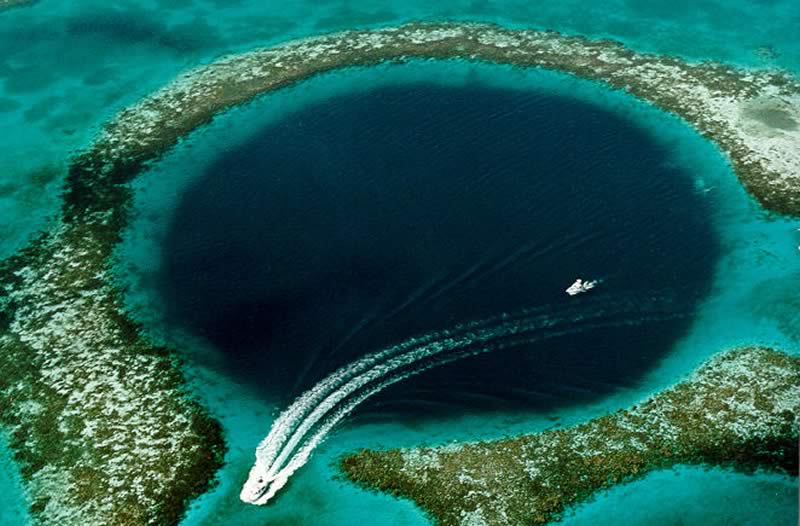 Like a giant pupil in a sea of turquoise, the Belize Blue Hole is a perfectly circular limestone sinkhole more than 300 feet across and 412 feet deep. The array of bizarre stalactites and limestone formations which mould its walls seem to become more intricate and intense the deeper one dives. The temperature at 130ft is about 76F with hardly any change throughout the year at that depth. 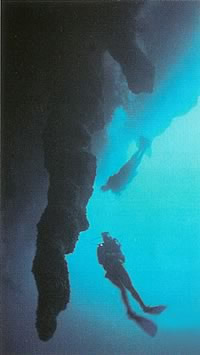 For all the practical purposes the over 400-foot depth makes the Blue Hole a bottomless pit. The walls are sheer from the surface until a depth of approximately 110 feet where you will begin to encounter stalactite formations which actually angle back, allowing you to dive underneath monstrous overhangs. Hovering amongst the stalactites, you can’t help but feel humbled by the knowledge that the massive formation before you once stood high and dry above the surface of the sea eons ago. The water is motionless and the visibility often approaches 200 feet as you break a very noticeable the rmocline. Recently, Caribbean reef sharks have also taken up residency in the Blue Hole, creating more excitement for divers.

Besides the Belize Blue Hole, Lighthouse Reef Atoll features many more world class dive sites including the Aquarium and Half-moon Caye Wall. The wall is a shallow drop-off beginning with huge nuggets of coral lying on a white sand bottom. A series of tunnels and swim-through that pierce the wall harbors schools of grouper and eagle rays.

Day trips to the Great Blue Hole is available from most coastal and island destinations in Belize however, they are way more frequent from Ambergris Caye, Caye Caulker and the private island resorts at Lighthouse Reef and Turneffe Atoll. Bear this in mind if the Blue Hole is a priority on the list of tours you want to do when you visit Belize.

We can arrange diving and snorkeling day trips to the Blue Hole from Ambergris Caye and Caye Caulker.

If you would like to be more conveniently located to the Blue Hole when taking a trip, consider an all inclusive package at one of the following private island resorts located at Lighthouse Reef Atoll itself or Turneffe: Huracan Diving Lodge  | Blackbird Resort | Turneffe Island Resort | Turneffe Flats | Itza Lodge or a Liveaboard Dive Boat