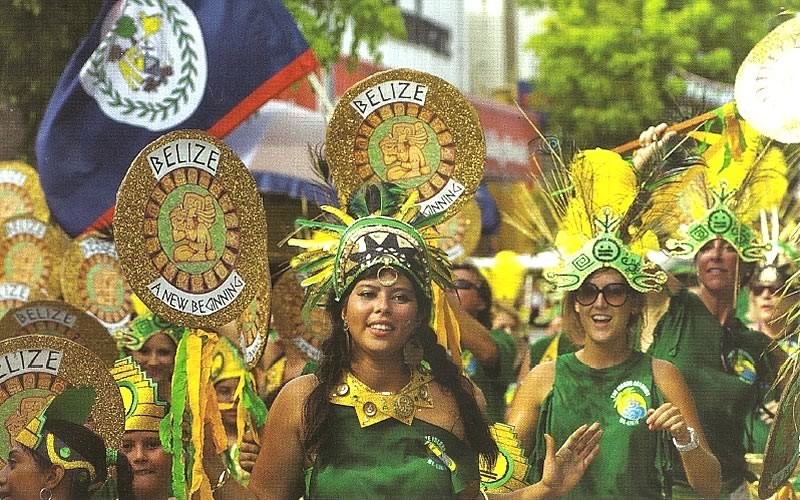 10th of September celebrations in Belize City in honor of The Battle of St. Georges Caye Day.

Belize Events are held annually and include everything from cycling races to Festivals, Agricultural Shows and Ethnic and Religious Celebrations.

MARCH
La Ruta Maya River Challenge
Professional and amateur paddlers from across Belize and the world participate in this grueling four-day race that retraces the Maya trading route between San Ignacio and Belize City
National Heroes’ & Benefactors’ Day
This national holiday is set aside to honor those men and women who have helped to build Belize. A traveling exhibition about Belizean heroes and benefactors tours the country throughout March.

Holy Saturday Cross Country Classic
The biggest cycling event of the year features local and international riders racing from Belize City to San Ignacio and back.

San Pedro Lagoon-Reef Eco-Challenge
Kayakers participate in this annual race to promote awareness, protection, and conservation of mangroves, lagoons, reefsas well as the diverse species found in these natural habitats.

MAY
Chocolate Festival of Belize
This three day event features food, exhibits, culture and information about the various ways the Maya utilized the Cacao bean. Festive entertainment is complimented by samples of locally made chocolate.

Cashew Festival
Crooked Tree village hosts this annual event to highlight the varied uses of the cashew in food and beverages. Visitors can also enjoy freshly caught tilapia from the lagoon.

National Agricultural & Trade Show
Thousands of people gather in Belmopan for this three day event which showcases the significant contribution of agriculture to the Belizean economy and highlights local businesses. Entertainment, games’ and cultural displays round out the fun.

JUNE
The Lamanai Challenge
This triathlon has participants running from La Milpa to Chan Chich, cycling from Chan Chic to Gallon Jug and then canoeing from Gallon Jug to the finish line at the Lamanai archaeological site on the shores of the New River Lagoon.
*Lobsterfest
At the start of the Lobster season in June, the coastal communities of San Pedro, Caye Caulker, and Placencia celebrate the first catch with festive activities, and cook the lobster in every way imaginable.

JULY
Hopkins Mango Festival
Villagers set up stalls on the beach where visitors can enjoy mangoes as the main ingredient in appetizers, entrees and desserts.
Archaeology Symposium
Organized by the Institute of Archaeology, this forum gives professional archaeological researchers working in Belize the opportunity to share archaeological findings. Attendance to lectures, displays and presentations are open to the public.

Belize International Film Festival
International film producers and directors join local counterparts to share their work and explore partnership possibilities. Attendance to the films is open to the public.

SEPTEMBER
National September Celebrations
Patriotic pride is high during this month. September 10th is celebrated as a National Day while the 21st is Independence Day. Activities during this festive month include carnival marches through principal streets of major municipalities. All events are accompanied by music, concerts, cultural activities and food.
Barry Bowen’s Belikin Bash
During this week-long event in Belize City includes nightly entertainment, food, and of course, plenty of ice-cold Belikin beers.

Garifuna Settlement Day
This public and bank holiday commemorates the 1832 arrival of the Garifuna people to Belize. National activities include re-enactments of the arrival, prayer, cultural dances and food.

DECEMBER
Christmas and Boxing Day
Christmas in Belize is a truly multicultural celebration. With so many ethnic groups, traditions are varied, and spirits are high. Traditional Boxing Day horse races take place in Burrel Boom. The horses run in classes,resting for an hour, then they race again.