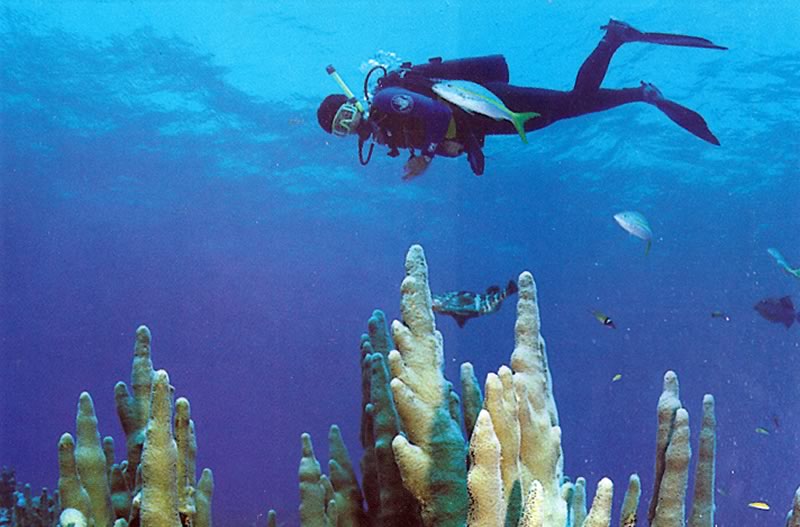 Turrets and spires of coral reach for the surface in a coral garden off Ambergris Caye, Northern Belize Reef.

Belize reef and coastal systems is approximately 185 miles long, the largest in the northern hemisphere. It includes three of four coral atolls found in the northwest Caribbean, as well as hundreds of small islands.  Naturally, this makes for an amazing underwater experience for visitors.

The Belize Barrier Reef along with Glovers Reef, Turneffe and Lighthouse Reef Atoll (home of the Great Blue Hole) are some of the most diverse Eco systems in the world. Divers and snorkelers will find paradise in Belize’s coastal areas. These areas are a haven for over five hundred species of fish and coral as well as invertebrates. Many threatened species, including marine turtles and manatees, also live here.

Citizens of the world and future generations should enjoy World Heritage Sites. Since we are dependent on the system for tourism, fisheries and shoreline protection, all Belizeans and visitors have a responsibility to contribute towards its conservation.

In order to increase the international awareness of threats the Belize Barrier Reef Reserve System was placed on the list of endangered World Heritage Sites in 2009. Several recommendations were made, and corrective measures were identified that continue to be implemented. The consequences of losing such biodiversity are great. Through responsible travel, visitors can continue to enjoy this natural wonder, and participate in efforts to protect the site.

Charles Darwin didn’t actually visit Belize reef, but after talking to other naturalists who had, he described it as “the most remarkable reef in the West Indies” in his 1842 book Coral Reefs of the World. Come experience Belize’s Barrier Reef and see for yourself why it’s so remarkable.